The Battle of the Boyne

The battle of the Boyne took place in July, 1690. It was an unusual battle for a number of reasons, not least because it actually took place on July 1st, but because of the changeover from the Julian to the Gregorian calendar the day is now commemorated on the 12th of July.

Towards the the end of the 17th century there were two claimants for the English throne - William and James. James was a Catholic, William was a Dutch Protestant married to James’ sister. William III was offered the throne of England in 1688. This also gave him a claim to the title of King of Ireland. James had been to France to try to raise an army to fight William after losing in England. He landed in Ireland and waged war against the Protestant Williamites. In December  of that year James tried unsuccessfully to capture Londonderry which resulted in the Great siege of Derry which lasted for some 105 days . In early 1690 William sent 16,000 men to Ireland to subdue James, but they were unsuccessful so, in June that year, William came to Ireland to take personal command of his army. Sir Cloudsley Shovell's squadron of warships escorted William's fleet of about 300 vessels across the Irish Sea into Belfast Lough on 14 June 1690. The best moorings had been taken by Schomberg's fleet, so it was not until noon that William's navy and supply ships dropped anchor. The king stepped ashore at Carrickfergus, sat briefly on a chair brought to him, mounted his horse and made his way to Belfast. Never before had Belfast greeted so many men of distinction. His landing at Carrickfergus is to this day  commemorated annually.

The battle for the supremacy of the English throne was also a battle to determine the status quo throughout Europe. The Catholics supported James, believing that he would return Great Britain to Catholicism. The Protestants backed William. This religious divide was seen throughout Europe, with English, Belgian and French Catholics backing James and their Protestant fellow-countrymen backing William.

William had brought with him over 40 pieces of artillery, some of the Dutch guns requiring 16 horses to pull them. He also brought a thousand horses and £200,000 in cash to pay his men, who numbered some 36,000. On 19th June 1690, King William set out from Belfast to Lisburn and from there towards Newry. James II pulled back from Dundalk to Drogheda and, just upstream from the port, his army took up battle positions along the south bank of the River Boyne.

The two great armies met at the Boyne river, near Drogheda. James and his mainly Irish army of about 26,000 were on the south bank, William and his followers on the north. On seeing the opposing army William exclaimed with delight "Ah, I am glad to see you, gentlemen; if you escape me now, the fault will be mine!" 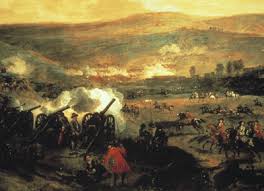 On Tuesday July 1st at 8.0'clock in the morning the battle started with an artillery barrage and William decided on a frontal assault across the river at Oldbridge. General Schomberg led some 7,500 soldiers westwards, away from the battlefield, intending to attack further up the river and come upon James from the rear. However, this move was primarily a decoy, and James took the bait. He sent a large part of his army, including his most seasoned troops, to attack Schomberg’s men. Schomberg crossed the Boyne and marched North, tracked by the opposing soldiers. However, neither side attacked the other because of the marshy ground separating them. In the meantime, William brought his main army from behind a hill where he had kept them hidden from James and led a head-on attack across the Boyne, fighting with  his experienced Dutch Blue Guards and English soldiers - they had to wade up to their armpits during the crossing, fiercely opposed by Tyrconnell's cavalry. William was in fact struck on the arm by a stray missile but carried on with the fight. Both the Duke of Schomberg and Rev George Walker were killed during the fighting.

James himself did not lead his troops, withdrawing instead to a hilltop well away from the scene of the battle from where he commanded his army. William however led his army from the front and was always involved in the heaviest fighting. It is widely believed that this difference in leadership styles played a large part in the swift victory of the Williamite forces. The Irish cavalry fought desperately to save the day but they had been out-manoeuvred and were never able to recover the ground lost due to being deployed by James against the decoy created by Schomberg. The battle raged on until 4 o'clock in the afternoon when James admitting defeat retreated hastily towards Kinsale and then on to Dublin and then to France. There are several stories told about his actions on the day. One story tells of Sarsfield, an Irish General in the Jacobite army who was jeered by an opposing General following the defeat. He is reputed to have said: "Change Kings and we'll fight you again!” Another story tells of King James complaining as he reached Dublin that the Irish troops ran away. A woman who lost several relations in the battle apparently replied "Congratulations, Your majesty, on winning the race!” . To this day in some parts of Southern Ireland James is still known as Seamus Akaka (James the sh*t)

The battle of the Boyne was a decisive European battle, one of the biggest battles of its time, some 1500 men were killed that day. Other battles took place, but the struggle in Ireland was short and William was victorious. The Battle of the Boyne established the throne of William Prince of Orange. The repercussions of this victory were felt right across Europe and persist in Ireland to the present day. On July 12th every year in Northern Ireland and in many other countries across the globe, tens of thousands of "Orangemen", so named, because they commemorate William of Orange, march in celebration of the great victory at the battle of the Boyne.